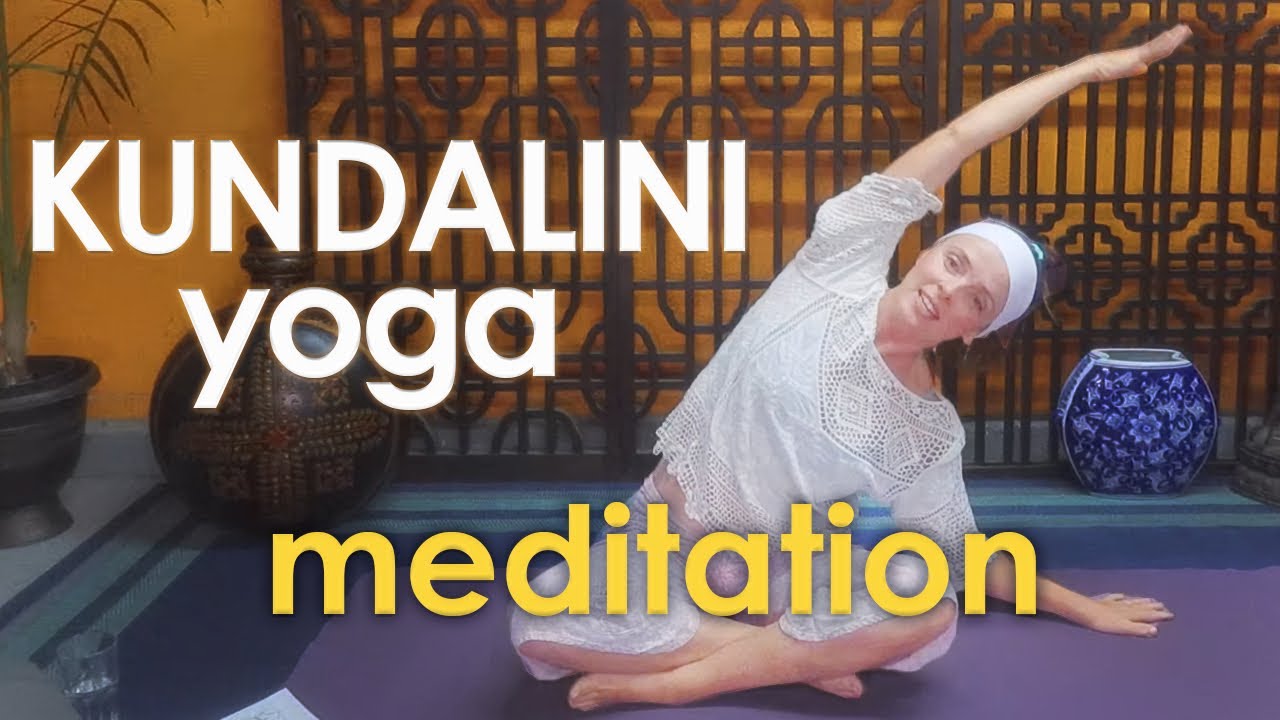 A guided kundalini yoga meditation class, focusing on releasing blocked energy to awaken the kundalini within the self. Featuring powerful kundalini kriya and pranayama to help you feel your most connected, energetic, blissful self, all in just 30 minutes!

What is Kundalini Yoga?
“Kundalini Yoga is the science to unite the finite with Infinity, and it’s the art to experience Infinity in the finite.”
-Yogi Bhajan, 10/27/88

Kundalini Yoga as taught by Yogi Bhajan® is called the Yoga of Awareness. It is a dynamic, powerful tool that is designed to give you an experience of your soul.

In Kundalini Yoga we harness the mental, physical, and nervous energies of the body and put them under the domain of the will, which is the instrument of the soul. This technology precisely and consciously combines breath, mudra, eye-focus, mantra, body locks, and postures to balance the glandular system, strengthen the nervous system, expand lung capacity, and purifiy the blood. It brings balance to the body, mind, and soul.

“In Kundalini Yoga the most important thing is your experience. It goes right to your heart. No words can replace your experience. Your mind may accept the words or it may not, but your consciousness will not accept just words.”
-Yogi Bhajan, The Aquarian Teacher Training manual, p. 20
Kundalini Yoga is not a religion. When we apply the technology of Kundalini Yoga to our bodies and minds, it has the effect of uplifting the spirit. It is for everyone. It is universal and nondenominational.

“The kundalini experience does not mean you have gone into a deep breathless trance and are beyond this world. … It integrates you more fully with reality and gives you a broader vision and sensitivity so that you can act more efficiently.”
~Yogi Bhajan, from Kundalini Yoga: The Flow of Eternal Power, back cover

About Maggie Grove
Maggie began her yoga journey over 15 years ago while living in New York City. She had a successful career as an actress, working alongside actresses such as Chloe Seivgny and Mischa Barton to name a few. But there was an inner longing for something more. Maggie came down with a virus that took over her body for several weeks. The virus was diagnosed as stress-induced. This led Maggie to her first yoga class. Such clarity and peace came to her that she never turned back.

Bikram Yoga Chelsea just opens 4 blocks from her 400 sq ft apartment. Maggie became a regular -she loved connecting with her body through movement and finding peace of mind. Under the guidance of studio owner John Golterman, Maggie got certified in Bikram Yoga 2005. She taught in Bikram studios throughout New York City for several years.

Her acting career brought her to Los Angeles. She continued to teach Bikram Yoga while acting in various films and commercials. She became a certified Kundalini Yoga Instructor at Yoga West during this period.

Maggie married a musician. Knowing children were on her horizon, she completed The Khalsa Way Prenatal Yoga training. Studying with Tej Khalsa and Gurmuhk, this training inspired Maggie to become a birth and postpartum doula. She has guided numerous women through childbirth for over 10 years. Maggie then began teaching Prenatal Yoga, Mommy & Me Yoga, and Power Yoga at The Yoga Collective in Santa Monica & Yoga West among various other studios.

During this time Maggie yearned for more knowledge on holistic living. Naturally this brought her to Ayurveda – the sister science of yoga. After completing her DASc in 2008 through Kerala Ayurveda, she studied in various ayurvedic clinics throughout Pune, India. Maggie currently conducts private consultations to help bring individuals back into balance physically, emotionally and spiritually.

Yoga has remained the one constant in her life. Yoga is her lighthouse…continuously bringing her back to her inner light and strength.

Maggie is honored to guide you on your yoga journey.

Maggie currently has 2 children and resides in Long Beach, CA.